The official date for (Inter)National Astronomy Day was today, May 14, 2016. The astronomy club to which I belong celebrates on Memorial Day weekend instead, since the weather in our region of the world is consistently poor from mid-April to the beginning of May. However, I wanted to do something for the occasion, and while shopping at the local Menards for Shop-Vac replacement parts, I stumbled upon Coleman’s Soft Glow Table Lamp. 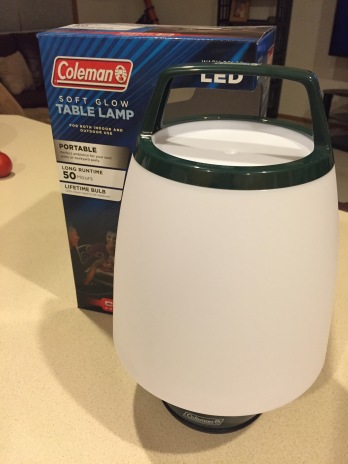 I thought it would be a good project to turn this into an astronomy-friendly red lantern. How hard could it be? The thing cost less that $20, so I threw it in my cart.

How to make it red? A quick Google search gave me the idea of using the flexible, squishy “gel” material from which decorative window clings are made. A stop at Hobby Lobby netted me a “Fourth Of July” pack of small clings — including a few red stars! Of course I laid down the $3 for that, and went home with my goodies.

Once back at the ranch, I unboxed the lamp, admired it for about ten seconds, and then immediately set about taking it apart. It was fairly obvious how to do so once the (empty) battery pack was removed: there are four cross-head screws that mate the base to the large white shade. So, time to gather all the items so I can work efficiently (I’m also a big fan of mies en place when cooking). 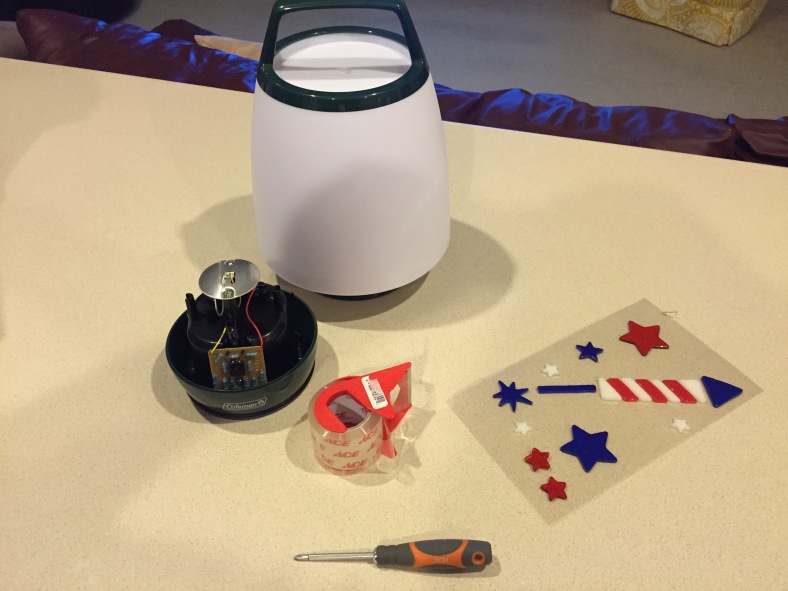 I found out a few things that you’ll want to know if you try this yourself:

I decided to use both of the small red stars to get a deeper red, and used a square of clear packing tape to simultaneously squish them against and secure them to the LED and reflector assembly. Be sure to use a square of tape large enough that the edges wrap around the edge of the shield, to make it extra secure. 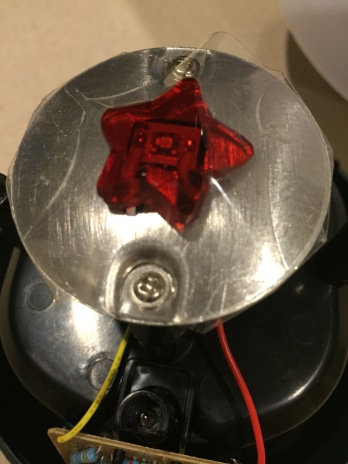 After that, it was a simple matter of putting the shade back onto the base, and tightening the four screws to mate the two together again.

Putting in the battery pack (now fitted with 4 D-cell batteries) allowed me to test the lamp. And, amazingly enough, it worked great right off the bat! I prefer the lower brightness setting for personal use, but the brighter setting will be good for public events.

There are a few irregularities in the illumination of the shade near the bottom — there were some crinkles in the tape that appeared as I formed it to the round shield. I suppose I could cut out a circular piece of tape and replace what I did, but I doubt I’ll ever get around to it. For $23 and about 10 minutes of time, I’m quite happy with the results, and I expect this lamp will see a lot of use on the deck and in the field for years to come.